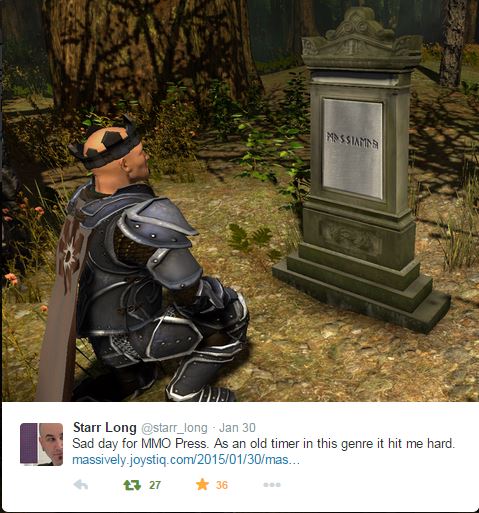 Rumors had been swirling for a few weeks, but it wasn’t until Brianna Royce’s official post last Friday that the news finally sunk in. Massively, one of the few gaming news sites strictly dedicated to MMO news, is shutting down. AOL, Massively’s overlords, decided in their process of restructuring to shut down their gaming news coverage contingent, Joystiq, which holds both Massively and WoW Insider under it’s umbrella. This comes as not only a blow to the writers and avid readers, such as myself, but I feel will send shockwaves throughout the industry.

In my opinion, Massively stood as one of the last bastions of trustworthy gaming news out there. The more and more irrelevant “consumer revolt” who’s embers are slowly dying claims one of their highest tenets as “ethics in gaming journalism”. Well, Massively epitomized that. They stood up time and again for the consumers and never sugar coated a game in their genre that they didn’t feel lived up to it’s expectations. As a Philadelphia sports fan, this is second nature to me. When you’re passionate about a subject, you celebrate the highs but you push back when you see the subject falter. We are keenly aware of how good it could be, and we push it to live up to those standards. Massively pushed the MMO genre to live up to higher standards, and the genre reacted. Over the years, time and again we saw MMO developers take what the journalists at Massively said to heart and make changes to their games for the better. And those that didn’t listen? Well, let’s just say humble pie is hard to swallow.

This level of enthusiasm, which you could almost physically feel coming out of the text, earned the trust of many readers. Even in disagreement, which happened frequently, that trust still flowed. In this day and age of polarization, what news sources can we really trust? I won’t lie, the prospects are grim. MMORPG.com exists, but it’s hard to take them seriously with the uber-cluttered front page and propensity to deck their background in scantily clad characters. Fatal Hero has a decent missive, but they don’t cover MMOs often, and most of their pieces border on the over-compensating negative side. Personally, unjustified negativity tends to drive me away.

I won’t lie, when it comes to world news more and more I tend to get it from Facebook and Twitter. When it comes to trending stories, multiple outlets produce multiple stories and, when taken with appropriate doses of salt, combined the truth can rise to the surface. Information by inundation. The other day I was watching the RizeUpGaming weekly stream on Twitch and I asked the panel of hosts how they felt about Joystiq being shuttered, and their overall response was a resounding “meh”. They didn’t see the closure of the site as any big deal as it had stopped becoming their primary source of news ages ago. YouTube, Twitch, Reddit, Twitter, and other aggregation sites were where they said they received their information currently.

Is this the world that we’re heading into? If so, individual game bloggers, streamers, podcasters, and vloggers may be the last bastion of truth. Game and MMO bloggers tend to write with that same passion that the Massively writers possessed, just with not as much talent. We’re not writing to get famous, to become rich, for personal glory. No, we’re writing to make a difference, to give a voice to what we wish to see, to push the genre to the heights it could reach. We’re writing because we want to be a part of the overall conversation.

So though I may feel sad that Massively is the victim of AOL’s thrashing about to remain relevant, I am hopeful. The writers have passion. That passion, combined with their experience, means that if they wanted to continue writing they could probably easily find outlets that will take them, and those outlets would become better for it.

P.S. – So, hey, it’s been a while since my last post. If you’re reading this, thanks. I’ll probably be picking up blogging once more, if for no other reason than to help throw my pinch or two of dirt into the sudden hole. Over the past few months, I just didn’t feel like what I said would add anything to overall conversation, thoughts I had were better reflected and better written elsewhere. I still think that’s true, but I may still post more anyway.

Edit: Well it looks like we certainly haven’t seen the end of that Massively spirit, as the gang appears to have started numerous new outlets all under the banner of “Massively Overpowered”, including a Kickstarter to fund the overall site! That didn’t take long. Here are all the links, check them all out:

2 thoughts on “The End of Massively, The End of an Era, The Opening Door”