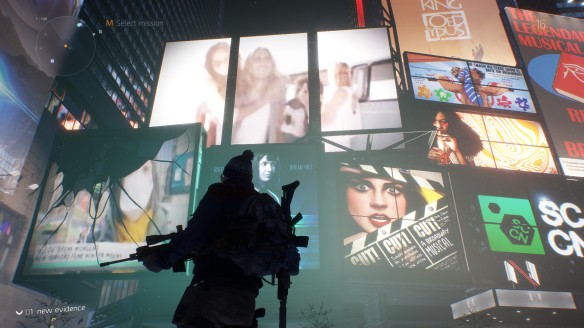 It took me a while, but I found out where I purchased The Division. In January of 2018 there was a sale on Humble’s Store, and I was able to pick up The Division for $20. Not bad, considering it’s now going for $5. In this day of multiple digital storefronts, from Steam to GoG, from Humble to GreenManGaming, Uplay to Twitch, it could have been anywhere. In trying to keep organized, I logged my purchase onto my master spreadsheet and then promptly moved on to playing Star Trek Online‘s 2018 anniversary event. However, I didn’t remember that I owned The Division until I started to hear about The Division 2. Once more in the middle of now Star Trek Online‘s 2019 anniversary, I thought ‘why not, let’s see what The Division is all about’.

Going into The Division, all I could remember were the complaints that distinctly put it into MMO territory. For a game that revolves around guns, the bad guys took way too many shots to take down. Also, PvP in the “Dark Zone” was a mess and not really worth the effort. Gear disparity, especially in PvP, was an issue. But that’s about it. I knew the story took place in New York City during a disaster of epic proportions. Also, my only experience with a shooter MMO has been Defiance, which wasn’t a bad game, in my opinion, just really repetitive in their overused events. 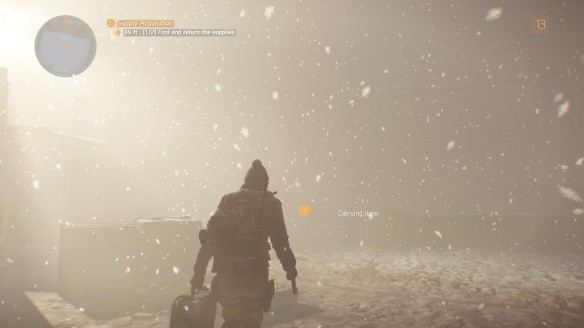 Occasionally the snow really comes down and you get whiteout conditions.

What The Division ends up being is a mixture. Similar to Guild Wars, the safe zones and headquarters act as social hubs to find groups, but the open world is instanced just for you. Similar to Guild Wars 2 and Elder Scrolls Online, movement across zones has a feel of point-to-point completion. Finally, similar to Defiance, the shooting feels tight with a nice selection of different weapons, but uses cover mechanics instead of shielding technology.

Where The Division shines, though, is in the extreme attention to detail in the setting. New York, falling apart due to a catastrophic plague, in the dead of winter. Seeing packs of rats scurrying around, dogs roaming the streets, piles of garbage on the sidewalks, apartments looking like they were vacated in a hurry, and even down to the small details of snow accumulating on your character’s shoulders and hat, or the pricing board of a local coffee shop.

In the Assassin’s Creed series, the focus is on performing multiple executions of figures from history. That’s part of the fun. Those figures from history really existed and usually died in either large battles or unknown circumstances. Placing the player in the part of being the “real” cause adds a nice fictional layer. In the same way, The Division, instead of murdering historical figures, has you going through intense fire fights in famous landmarks. I’ve only made it halfway through the game so far, but missions have taken place in Madison Square Garden, Lincoln Tunnel, and Times Square. Having lived near the New York area, it has been extremely satisfying seeing these landmarks used in this way. 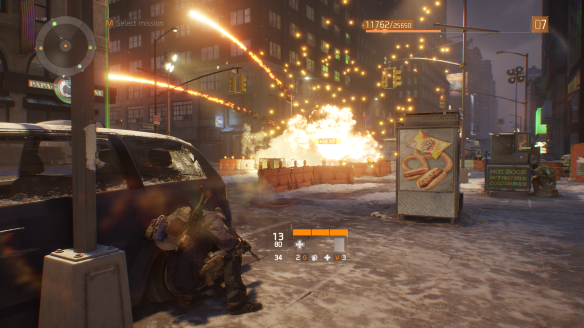 Well, that’s the risk you take when you carry a tank of napalm on your back.

My downsides to The Division are pretty much agreeing with the complaints that I’ve heard of. The bosses are real bullet sponges, and with your character getting seriously punished for being out of cover, end up feeling quite frustrating at times. Also, the story, though interesting, is only presented in drips are drops through vignettes: phone recordings, futuristic style “echos”, or other stories of survival. Not bad drips and drops, though, but not enough to really balance the combat and the environment. Halfway through the game we’ve mostly figured out who started the plague, and how they started it, but that’s about it. Also, the “how” was really given during the game’s introductory video, so figuring out how the plague started really didn’t come as a surprise.

Overall, though, the graphical detail and the setting are really the game’s strengths. Coupled with the decent feeling combat, they outweigh any of the negatives I listed, making The Division a really enjoyable experience. Even more than I was anticipating. I don’t think I’ll ever see this as a serious multiplayer title, having not even dabbled with grouping yet, but as a single-player experience I’m really enjoying it and glad that I finally gave it a shot.